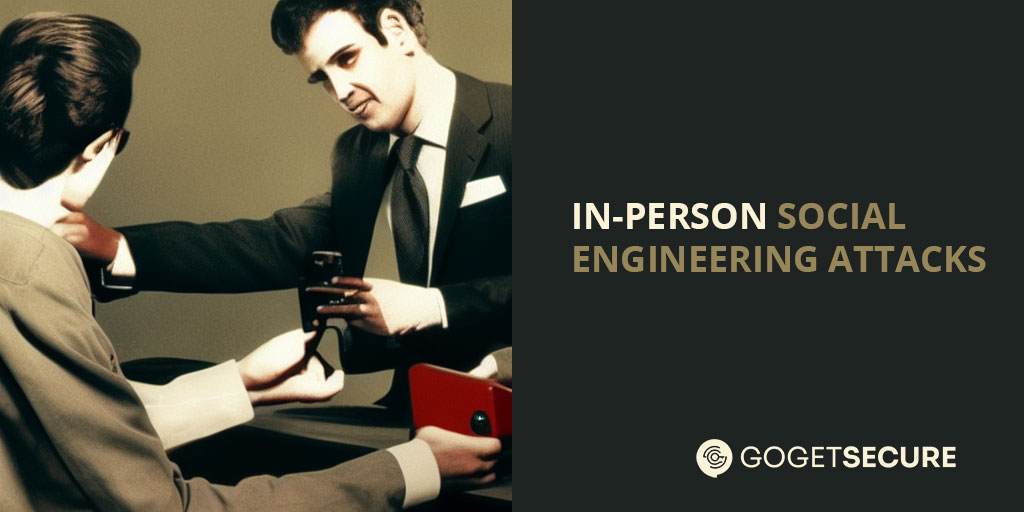 Posted at 22:40h in Cyber Security by Stefan Schulz

Have you ever been in a social situation where someone makes you feel really uncomfortable? Maybe they’re being overly friendly or asking too many personal questions. Turns out, this might be the start of a social engineering attack.

In this blog post, we’ll discuss in person social engineering attacks, and how to protect yourself from them. We’ll also look at some real-world examples and share information on how frequently they occur.

What is Social Engineering?

Social engineering is a type of attack where a malicious party manipulates individuals into divulging confidential information or performing actions that may compromise security. This can be done through various methods, including phishing emails, phone calls, text messages, and yes, even in person interactions.

The short answer is yes, social engineering attacks can absolutely happen in person. In fact, some argue that in person attacks are even more dangerous because they often involve direct interaction with the attacker.

In person social engineering attacks can occur in various settings, including business meetings, events, or even just casual interactions. The attacker may use personal information gathered from public sources (such as social media) to seem more credible and gain your trust. They may also try to exploit your emotions, such as fear or sympathy, to get you to comply with their requests.

Physical and face-to-face social engineering tactics can vary, but some common ones include:

Interestingly, some common social engineering attacks utilize both physical and digital social engineering tactics. For example, a layered attack might often start with an email, but may lead to a phone call or in person meeting in order to further manipulate the victim. Because of this it’s important to look for early warning signs and be aware of tactics in all forms of communication, not just digital.

How Often Do In-Person Attacks Occur?

The frequency of in-person social engineering attacks is not currently quantified; however, they do occur frequently enough to warrant concern.

In a report by Purplesec, 98% of cyber-attacks involve social engineering on some level. In-person attacks often require significant more research, planning, and personal interaction from the attacker. Because of this they likely make up a much smaller percentage of attacks that can be executed with a wider target base like phishing attacks.

In short, physical tactics will never be as common as phishing, vishing, or smishing. However, they can still happen and because they are more isolated and personalized, they are often conducted with intent to cause greater damage.

Who Are the Most Likely Targets of In Person Social Engineering?

In person social engineering attacks can target anyone, but there are certain individuals who may be more susceptible. This includes employees with access to sensitive information or physical locations, as well as high-profile executives and public figures.

In fact, according to ZD Net, IT professionals are targeted 40 times each year, which averages out to more than 3 times per month. If you have access to valuable information or hold a position of authority, it’s important to stay vigilant and constantly remind yourself and your colleagues about the potential risks of social engineering.

How to Protect Yourself Against In Person Social Engineering Attacks?

One of the best ways to protect yourself against in person social engineering attacks is to continuously educate yourself.

Fortunately, there are a number of great social engineering books, courses, and podcasts dedicated to teaching individuals about the techniques used by attackers and how to defend against them.

One book that should make its way onto your reading list is “The Art of Deception” by Kevin Mitnick, a former hacker who now educates individuals and companies on how to protect themselves against these attacks.

It’s also important to remain vigilant and wary of any unexpected or suspicious interactions, whether it be a stranger asking for personal information or someone claiming to be from IT asking for your password. If in doubt, verify the person’s identity and always err on the side of caution.

In addition, having strong physical security measures in place can greatly reduce the likelihood of physical breaches and tailgating. This includes ensuring secure entrances with access controls, monitoring visitor logs, and properly disposing of sensitive documents or information.

Overall, in person social engineering attacks may not be as common as other forms of attack but they can still occur and have the potential to cause significant damage. It’s important to educate yourself, remain vigilant, and take steps to strengthen physical security measures in order to protect against these threats.