BugCrowd: A Comprehensive Guide for Companies and Hackers 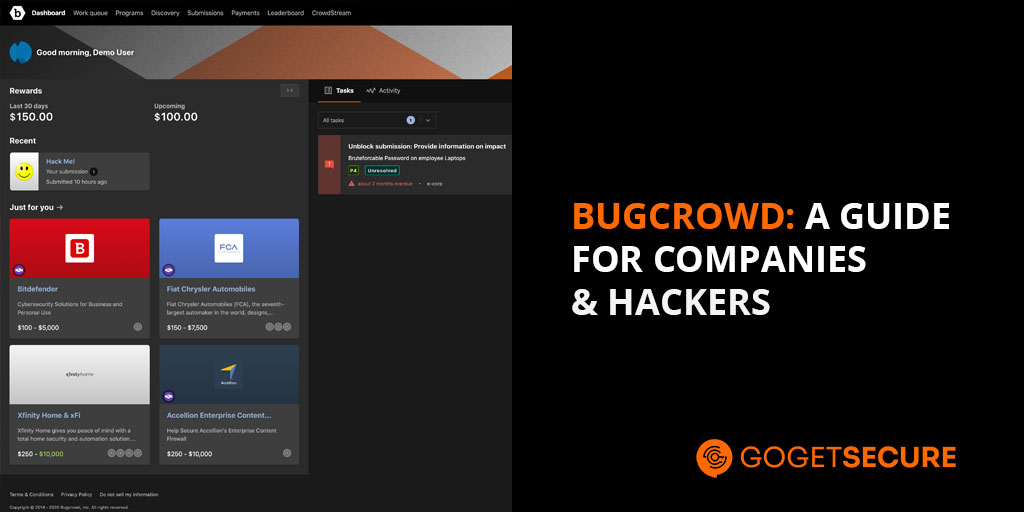 03 Jan BugCrowd: A Comprehensive Guide for Companies and Hackers

Posted at 01:53h in Ethical Hacking by Stefan Schulz

Bug bounty programs have become an increasingly popular way for companies to identify and fix vulnerabilities in their systems and applications.

These programs offer financial rewards to white hat hackers who can find and report bugs rather than take advantage of them. Several platforms facilitate bug bounty programs; one of the most well-known is Bugcrowd.

Bugcrowd is a crowdsourced security platform that connects companies with a global network of white hat hackers. Hackers can participate in a wide range of bug bounty programs and earn rewards for finding and reporting security vulnerabilities.

Bugcrowd was founded in 2012 by Casey Ellis, who saw the potential for a platform that could bring together companies and hackers in a mutually beneficial way. Since its inception, Bugcrowd has become one of the leading bug bounty platforms.

In a short 10-year period, they have grown their internal staff to over 250+ employees and offices in San Francisco, London, and Cost Rica. They have also raised 83M in venture capital, which has helped them grow their market share and build the platform.

Today, Bugcrowd’s customer base has expanded to over 600 companies across 30 industries and 43 countries. More than 275,000 ethical hackers reportedly contribute to security research on the platform.

How does BugCrowd work?

Bugcrowd is a platform that connects companies with ethical hackers and offers various services. This section will focus on its core function of facilitating bug bounty programs. Let’s first dive into how Bugcrowd works to service companies.

Companies can use Bugcrowd to launch a bug bounty program or supplement their security efforts.

To do so, they must submit a request through Bugcrowd’s website. This will open up a conversation with a Bugcrowd specialist, who will work with you to identify the solutions that best suit your needs and provide you with a cost outline tailored to your unique requirements.

Companies can leverage insights from a wealth of security knowledge gathered over the past decade from Bugcrowd. This, plus payment and vulnerability management tools with detailed reporting, makes Bugcrowd an attractive platform for companies focused on proactively testing systems for potential weaknesses.

Bugcrowd provides an opportunity for hackers to use their skills and expertise to find and report vulnerabilities in the systems of various companies.

Hackers can sign up to be a part of Bugcrowd’s network by creating a profile. Once activated, they can participate in public bug bounty programs and earn rewards for any vulnerabilities they find and report.

Hackers can work with various companies and industries through Bugcrowd’s platform, allowing them to continually test and improve their skills while also making a positive impact and earning financial rewards.

Bugcrowd also offers a leaderboard feature that ranks its top hackers. This leaderboard is updated in real-time and considers the number and severity of vulnerabilities found and reported by each hacker.

Top hackers on Bugcrowd can earn achievements and are often invited to participate in private programs. These private programs offer the opportunity to work on high-profile projects and earn even more significant financial rewards.

Additionally, hackers can leverage Bugcrowd University, an educational hub. Bugcrowd University aims to provide hackers with the knowledge and skills needed to be successful on the Bugcrowd platform and in the broader field of cybersecurity. The resources include expert content surrounding ethical hacking, penetration testing, and web application security.

Bugcrowd has helped numerous companies across various industries identify and fix vulnerabilities in their systems through its crowdsourced security platform.

At the same time, it has provided a way for white hat hackers to use their skills and expertise to make a positive impact and earn financial rewards.

Below are a few examples of the successes of both companies and hackers on the Bugcrowd platform.

These success stories demonstrate the value that Bugcrowd brings to companies and hackers.

Companies can improve the security of their systems and protect their customers’ data. Hackers can use their skills to make a positive impact and earn financial rewards. Bugcrowd’s platform serves as a win-win for both parties, and it is no surprise that it has become one of the leading bug bounty platforms in the industry.

Pros and Cons of Bugcrowd

While Bugcrowd can provide a tremendous opportunity for companies and hackers to unite, it does come with some potential drawbacks.

What is Bugcrowd used for?

Companies use Bugcrowd to identify and fix vulnerabilities in their systems and applications through a bug bounty program.

No, Bugccrowd charges a fee for its services, which includes access to its network of hackers and the tools and support needed to run a successful bug bounty program.

Where is Bugcrowd based?

Bugcrowd is based in San Francisco, California.

How does Bugcrowd pay?

Hackers are paid for their efforts through the financial rewards set by the companies running the bug bounty program. Bugcrowd handles the payment process and ensures that hackers are paid promptly.

Yes, Bugcrowd is a CREST-accredited service provider. CREST is a non-profit organization that sets standards and best practices for the technical security industry.